Easy and over the top delicious Cinnabon style cinnamon rolls at home! This recipe deserves ALL the hype it has been getting for months over on TikTok.

This viral TikTok recipe has long touted that you will ‘never make regular canned cinnamon rolls again,’ and I have to say that I agree 100%. They are so simple to make and yield melt in your mouth goodness.

I have made these rolls using either heavy cream or half & half. I prefer the half & half personally. To me they tasted just the same as heavy cream, so why not lose a few calories. I wouldn’t recommend using anything lighter, like 2% milk.

What if I can’t find pumpkin spice canned cinnamon rolls?

Canned pumpkin spice cinnamon rolls are seasonal so if you have trouble locating them, I would try adding pumpkin spice seasoning to the brown sugar and butter mixture before baking. You could even add it to the frosting for more flavor. I would start with a teaspoon and check to see if the flavor is strong enough for you and add more if you prefer.

Can I use other flavors?

Use any flavor you would like, traditional cinnamon, orange rolls or like in this variation, pumpkin spice flavor.

Can I double the recipe?

This recipe makes 5 jumbo rolls. To double the recipe, double all ingredients and bake it in a 9×13 inch pan. Cover and bake as normal, checking at 30 minutes for doneness. They should be fully baked through in the middle. If they aren’t bake for a few more minutes and check again.

What if I hate the frosting that comes with?

You can of course make your own frosting, either regular or cream cheese. You can also pick up a can of premade cream cheese frosting and use a portion of that. 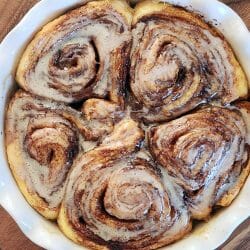 Jumbo cinnamon rolls are my preference but you can make this recipe with a can that comes with 8 instead and it will still turn out wonderful. Other flavors such as orange cinnamon rolls can be used. If you have trouble locating pumpkin spice canned cinnamon rolls, you could add pumpkin spice to the brown sugar and butter mixture, or to the frosting. A lot of recipes say that heavy cream MUST be used but that is not my experience. I use half and half as that is what I normally have on hand and it turned out perfect. I’ve also used heavy cream. Both are great. I cannot vouch for anything less than half and half. I don’t think I would try using whole milk or 2%. To double this recipe, double all ingredients and baking in a 9×13-inch pan, checking at 30 minutes for doneness.