Frozen Cool Whip & Cinnamon Graham Cracker Sandwiches are low in calories, coming in at 70 calories each. The flavors of cinnamon graham crackers and cool whip is a winning combination.

These days I am loving simple recipes. The fewer the ingredients, while still making delicious recipes, the better.

One of my favorite TikTok creators, iidanielle75ii, has a series of snacks recipes that are easy and delicious. I plan to make a few of them, these Frozen Cool Whip and Cinnamon Graham Cracker Sandwiches being first. Be sure to check her out if you are a TikTok fan!

If you wanted to further cut down the calories, there are reduced fat graham crackers available. I opted for cinnamon as that is what I had on hand, with the added bonus of that nice cinnamon flavor. 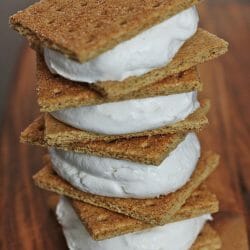