I’m willing to bet that most people haven’t seen a banana pudding with meringue baked on top. This recipe comes from Maya Angelou and uses a from scratch vanilla pudding, sliced bananas on top of a layer of nilla wafers. 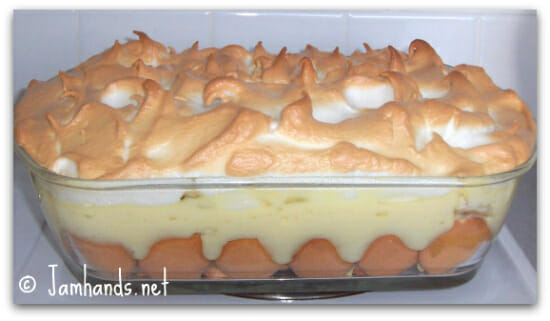 The pudding got quite brown only after 15 minutes, much more brown than I would have liked. I think next time I would bake only till tips were golden. Regardless, it tasted great.

Day two taste test: As much as I loved this pudding, it’s definitely not as good on day 2. The nilla wafers turn to a grainy sorta paste. I would think this recipe would be great just minus the wafers if you planned on having leftovers the next day. If you are planning on only serving it once, go for the wafers.

1. Preheat oven to 350f. In a large saucepan, combine 1/3 cup sugar, cornstarch, and salt; stir until blended. Mix in milk. Cook over medium heat, stirring constantly until thickened and boiling; boil 1 minute; then remove from heat.

2. In a small bowl, whisk egg yolks, then whisk in about 1/2 cup of hot custard until blended. Pour yolk mixture back into saucepan of custard; cook over medium heat, stirring, 2 minutes. Stir in butter and vanilla until blended.

5. Spoon meringue over hot custard immediately, making sure that meringue touches baking dish on all sides (this prevents it from shrinking). Transfer to oven and bake until golden, about 20 minutes. Remove pudding from oven and cool 1 hour. Refrigerate at least 4 hours before serving.