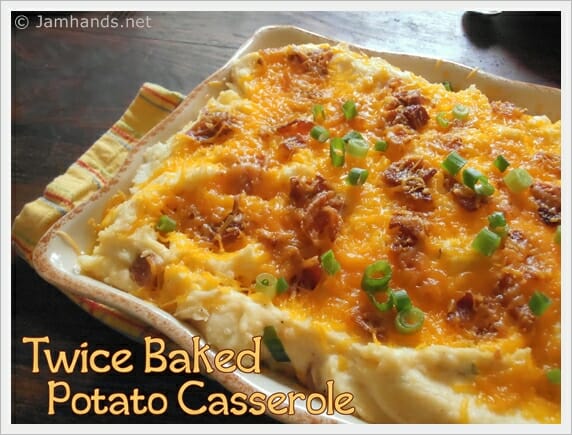 One of the new recipes we tried out this Easter was this delicious Twice Baked Potato Casserole by Six Sisters’ Stuff. Instead of going through the hassle of having to scoop out and refill potato skins, it is all mixed up and baked in one giant casserole dish. It received many compliments at our dinner and I bet it will at yours too. Many thanks to Six Sisters’ Stuff for sharing this! Ready for the recipe?

Twice Baked Potato Casserole
Makes a 9″x13″ dish
1. Preheat oven to 350 degrees. Peel potatoes, and cut into 1-inch chunks. Place in a large saucepan, and add enough cold water to cover by about 2 inches. Bring to a boil over medium-high heat, and reduce to a simmer. Cook until tender and easily pierced with a paring knife, about 20 minutes. Transfer to a colander to drain; return to pan, cover, and set aside.
2. Meanwhile, heat a large skillet over medium heat. Add bacon, and cook until crisp and browned, turning once. Transfer to paper towels to drain; let cool, and crumble into pieces.
3. Using a fork, mash the potatoes in pan until light and fluffy. Add the cream cheese, butter, and sour cream, and stir until combined and smooth. Add the chives, 2 cups cheddar cheese, half the bacon, salt, and pepper. Stir until well combined.
4. Transfer to a buttered 3-quart baking dish. Top with remaining 1/2 cup cheddar cheese. Bake until top is slightly golden and potatoes are heated through, about 30 minutes. Remove from oven; garnish with remaining bacon. Serve immediately.
Recipe by Six Sisters’ Stuff